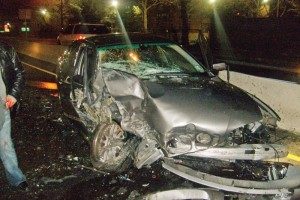 Two people were treated at CentraState Medical Center in Freehold, New Jersey for injuries resulting from a four-vehicle collision on the evening of Tuesday, May 26. Koron Duncan, 25, of Manalapan, was allegedly the driver of a van which failed to observe a red light, colliding with three other cars before Duncan exited his vehicle and attempted to run from the scene of the collision. Duncan was apprehended and arrested. Authorities have also learned that the van Duncan was driving when the collision occurred had been stolen from its owner. A search by police also allegedly yielded marijuana and Drug Paraphernalia in Duncan’s possession.

Further potential penalties apply under N.J.S.A. 2C:20-10 for the unlawful taking of the vehicle which Duncan was driving at the time of the accident. Under this statute, which classifies the unlawful taking as a fourth-degree crime, Duncan could face penalties including jail time of up to three years. The Freehold NJ Municipal Court will oversee this case. The featured image is courtesy of nj.com