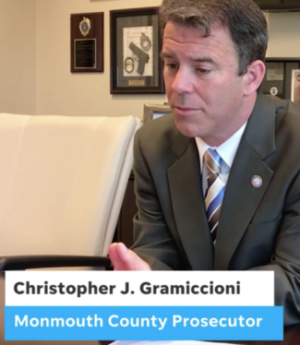 Arrested for Robberyin Monmouth County?
Contact Our Freehold Law Office To Speak To Our Highly Experienced Robbery Defense Lawyers Including the Former Director of Major Crimes at the Monmouth County Prosecutor's Office
Get Your Free Consultation

Robbery is a violate crime that carries severe penalties in the event you are convicted at the Monmouth County Superior Court in Freehold New Jersey. You should also know that the No Early Release Act, which requires that 85% of any prison sentence be served before consideration for parole, applies whether you are found guilty of first degree or second degree robbery. The consequences of being arrested and charged with robbery are clearly dire so there is little room for handling this type of offense without a highly talented criminal lawyer.

We are the Law Offices of Jonathan F. Marshall, a Freehold NJ firm that specializes in the defense of individuals who have been accused of breaking the law. Our experience in handling robbery charges in Monmouth County and elsewhere is extensive. Our qualifications are truly rare with attorneys on our team that:

If you were charged with robbery anywhere in Monmouth County, an attorney at our firm is well equipped to full protect your interests. Whether our representation requires persuasive plea negotiating or an accomplished trial lawyer, you can rest assured that we have you covered. For an immediate free consultation to discuss a first appearance, detention hearing or any other facet of a robbery case in Monmouth County, contact our Freehold Office at 732-462-1197.

A robbery charge under N.J.S.A. 2C:15-1 is a second degree crime if three (3) elements of proof are established beyond reasonable doubt. The state must prove that the defendant was:

The term “bodily injury” means causing pain or impairing the physical abilities of another person.

“Force” is defined as use of physical power or strength against the victim although there is no requirement that it actually cause them pain or harm.

Conduct is “knowing” if defendant is aware that there is a practical certainty that it will produce a certain result.

Robbery is enhanced to a first degree crime if, during the course of committing or attempting to commit a theft, the accused engages in more violent conduct than what is required for its second degree counterpart. The actor must engage in one of the following:

For purposes of a charge for first degree robbery under (1) above, “serious bodily injury” is an injury that creates a substantial risk of death or which causes serious, permanent disfigurement, or protracted loss or impairment of the function of any bodily member or organ.

The term “deadly weapon” means a firearm or other weapon, device or instrument that is capable of causing death or serious bodily injury.

Someone can be convicted of robbery even though they were not the one who threatened or assaulted the victim if they conspired to commit the offense. Conspiracy to commit robbery occurs if:

The term “overt act” means a substantial step taken to accomplish a particular criminal offense.

Accomplice Who Is Armed. When someone commits a robbery with an accomplice who, unbeknownst to the actor is armed, guilt or innocence for first degree robbery comes down to intent. If the actor had no intention that a weapon would be involved then they have no culpability for a first degree crime.

NERA. As previously stated, robbery falls under N.J.S.A. 2C:43-7.2(9) of the No Early Release Act (“NERA”). What this means is that someone sentenced for robbery must serve at least 85% of their prison term before they may be considered for parole.

Graves Act. When robbery is committed with a handgun, shotgun, BB gun or other firearm, the Graves Act applies. This provision of New Jersey law imposes additional mandatory minimum terms of imprisonment at the time of sentencing for armed robbery.

There are an array of questions that frequently arise in Freehold robbery cases. The following are some of them:

1. Can I Secure Pretrial Release If I Have Been Charged With Robbery?

Prior to bail reform, an individual would have his/her bail set after being arrested and processed on a robbery charge. The accused would thereafter be released if the bail amount was posted. This process no longer occurs since monetary bails were eliminated in New Jersey. An individual must undergo a public safety assessment (“PSA”) following an arrest. The PSA outlines a score on a scale of 1-6 (i.e. one being best and 6 worst) for two factors: (1) risk of reoffending; and (2) risk of not appearing or obstructing. The Monmouth County Prosecutor’s Office has an absolute right to object to release and, when this occurs, a formal detention hearing must be conducted to determine whether or not someone accused of robbery should be released prior to trial. A motion to detain is filed in almost all Monmouth County robbery cases. It is pivotal that an individual have competent representation from an attorney who is both fully prepared and skilled at a detention hearing since it will determine whether he is released.

2. Is it possible to have a first degree armed robbery reduced to second degree robbery?

It is always possible for a talented criminal defense lawyer to obtain a downgrade of a first degree robbery offense to second degree robbery. There are a number of factors that come into play in this regard and the level of skill and respect possessed by your attorney is definitely one of them in our estimation. The members of our team include a lawyer who served as the Director of Major Crimes and another who was the head of the Trial Division at the Monmouth County Prosecutor’s Office. We believe that these lawyers have the attributes to translate into a downgrade in a robbery case.

3. Does NERA always apply in a Monmouth County robbery case?

Unfortunately, every conviction for robbery falls within the No Early Release Act, requiring the defendant to serve 85% of their sentence. This fact makes it all that more important for your lawyer to obtain a downgrade of a robbery charge to theft (a.k.a. theft of the person) or another offense that does not fall under NERA.