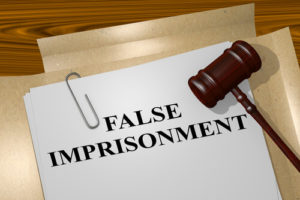 The offense of false imprisonment is definitely one that is seldomly filed in Monmouth County. Nonetheless, a number of cases involving this charge are filed every year. If you were arrested for falsely imprisoning someone, you need to take swift action to defend yourself as a conviction carries significant penalties, including up to 6 months in jail. Thankfully, the attorneys at The Law Offices of Jonathan F. Marshall have many years of experience handling a wide variety of criminal cases. Our skills have been honed over decades serving as not only defense lawyers but also as prosecutors in this county. A lawyer on our team is equipped to defend you in Freehold, Deal, Sea Bright, Belmar, Howell or anywhere else in the county. For immediate assistance from an attorney at the firm, call us at 732-450-8300.

The offense of false imprisonment is contained at N.J.S.A. 2C:13-3, which provides as follows:

“A person commits a disorderly persons offense if he knowingly restrains another unlawfully so as to interfere substantially with his liberty. In any prosecution under this section, it is an affirmative defense that the person restrained was a child less than 18 years old and that the actor was a relative or legal guardian of such child and that his sole purpose was to assume control of such child.”

Explanation of the Law. In accordance with N.J.S.A. 2C:13-3, a person is falsely imprisoned if their freedom of movement is constrained through force or threats of force (i.e. words or conduct). An imprisonment is “false” where it is without color of legal authority, or legal justification. The restraint or imprisonment must also be unlawful and achieved through actual or apparent physical barriers or by words. It is an affirmative defense, meaning an absolute basis for avoiding guilt, that the victim was less than 18 years old and the accused was a relative or legal guardian of the child and that his or her sole purpose was to assume control of the child.

False Imprisonment is a disorderly persons offense. A conviction results in a record that cannot be expunged for a period of at least five (5) years. An individual is also exposed to a period of incarceration that can involve up to six (6) months in jail. A period of probation and monetary penalties, including fines and mandatory assessments, also apply.

The Law Offices of Jonathan F. Marshall possesses a team of attorneys that can assist you. We offer free initial consultations by telephone or in-person in Red Bank, Freehold and other locations. An attorney will thoroughly review the facts of your case and discuss your options in defending the charge in Howell, Long Branch, Middletown, Ocean, Wall or another venue. You have nothing to lose and everything to gain by contacting our firm as call is without obligation.