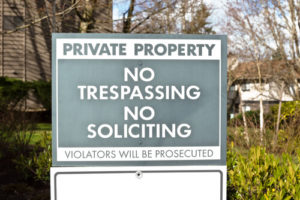 Contact Our Firm To Speak To the Former Howell Prosecutor

The offense of trespass commonly arises when an individual is caught attempting to sneak into, has been denied entry into, or has been kicked out of a bar or nightspot, or individuals fail to disperse when ordered to do so. Another re-occurring scenario is an intoxicated or lost individual who wanders into the wrong property.

But, regardless of the circumstances that lead to you being charged with trespass in Howell, New Jersey, it is important that you hire an experienced criminal attorney to help you avoid a conviction.

The defense lawyers at The Law Offices of Jonathan F. Marshall have been successfully representing clients in Howell, New Jersey and throughout Monmouth County for several decades. Our team of skilled attorneys includes former prosecutors with over 100 years of combined experience in New Jersey courts.

If you or someone you know has been charged with criminal or defiant trespass in Howell, New Jersey, we have the experience and expertise to resolve your case with the best possible outcome. Contact our Office at (732) 450 8300 to speak to a lawyer in a free consultation now.

Charged With Trespass in Howell, NJ

Under N.J.S.A. 2C:18-3, there are three ways a person can be charged and convicted of trespass in Howell Municipal Court or the Monmouth County Superior Court. The headings below outline the varieties of this offense that someone can face under the New Jersey Trespass Law.

I. Criminal Trespass (2C:18-3a). This occurs when a person knowingly enters or surreptitiously remains in certain specific structures like a dwelling, a school, or in a place of critical infrastructure such as a research facility, waste treatment facility, public sewage facility, or power plant.

In order to be found guilty of criminal trespass, the state must prove the following:

Criminal trespass in a dwelling, a school, or in a place of critical infrastructure is a fourth-degree indictable offense (a felony) that will be handled in the Monmouth County Superior Court in Freehold, New Jersey and carries with it a fine of up to $10,000, up to 18 months in prison, probation, community service, a driver’s license suspension, and a felony criminal record.

Criminal trespass anywhere else will be graded as a disorderly persons offense (a misdemeanor) and handled at the Howell Township Municipal Court, where a conviction will carry a fine of up to $1,000, up to 6 months in jail, and a criminal record for a misdemeanor.

II. Defiant Trespass (N.J.S.A. 2C:18-3b). You may be charged with a defiant trespass in New Jersey if you enter or surreptitiously remain in a place where you have been notified that you are not allowed to be. This notice could either have can been:

To be found guilty of defiant trespass, the state must prove that: (1) you entered or remained in the structure surreptitiously. You had no license or privilege to enter the structure; (2) You knew you had no license or privilege to enter the structure; and (3) You were reasonably notified that you were trespassing by either a sign, symbol, fence, or from someone with the legal authority telling you that you are trespassing. The concept of notice is key to a conviction for defiant trespass. Once you have been notified that you are trespassing by one of the methods listed above and you enter or remain on the property, you may be charged and convicted of defiant trespass. So, for example, if you are at an establishment where you were authorized to enter and you then are asked leave but don’t, you can be charged with trespass.

Defiant trespass is a petty disorderly persons offense, punishable by up to 30 days in the County jail, a fine of up to $500, probation, community service, counseling, restitution, and a possible suspension of your driving privileges.

III. Peering Into Windows or Openings (N.J.S.A. 2C:18-3c). If you are caught peeping into a window of a dwelling, hotel, or something of that nature where it can be reasonably assumed that the person inside does not expect to be observed, you can also be charged with for trespass.

Peering into windows or openings is a fourth-degree indictable offense that, if convicted, will expose you to the same penalties as for criminal trespass. But, in order to be convicted of peering into windows or openings, the state must first prove that: (1) The place was a dwelling, hotel, or something of that nature; (2) You peered into a window or opening; (2) You knew that had no license or privilege to peer into that window or opening; (3) You peered inside to invade the victim’s privacy; and (4) The victim did not expect to be observed

In New Jersey, trespass is a lesser included offense of burglary. In fact, the only difference between burglary and trespass is your intent. To be guilty of burglary you must have knowingly entered a structure with the intent to commit a crime, usually theft. But, this is not the case with trespass. With trespass, you only have to enter a structure owned by another without having license or privilege to be there.

Trespass may also be considered an act of domestic violence when the victim is a person who is protected under the New Jersey Domestic Violence Prevention Act. As such, if you are charged with trespass as an act of domestic violence, you may have a restraining order placed against you an be subject to the loss of certain civil rights, like the right to possess a firearm.

There are several defenses to prosecution for trespass in New Jersey, such as lack of intent (meaning that the “no trespassing” sign wasn’t obvious and you simply wandered onto the property) and lack of knowledge (for example, you were invited to a party but didn’t know that the person who invited you had no authority to do so). Other affirmative defenses may exist when, for example, the structure was uninhabitable or abandoned, or else open to the public, or when a window or opening was open to the public, or there was no expectation of privacy.

Even though trespassing isn’t the most serious crime you can commit, a conviction should be avoided if at all possible. A conviction, no matter how minor the pedigree of trespass, results in a criminal record, fines and even the possibility of jail. It is therefore important to retain an attorney to defend you against a trespass offense. The defense lawyers at The Law Offices of Jonathan F. Marshall have the know how and track record of success to thoroughly protect your future. Call us at (732) 450- 8300 to speak to a lawyer in a free consultations. Attorneys at the firm are available around the clock to assist you.