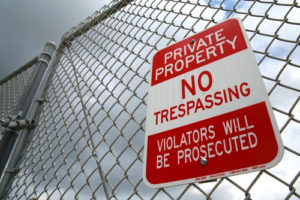 The police in Monmouth County are writing more and more criminal complaints for trespass, especially in municipalities that are summer hot spots like Manasquan, Lake Como, Belmar, Sea Girt and Asbury Park. A trespassing offense targets not only the classic trespasser but also those who have been denied entry to bars and fail to disburse or individuals who attempt to sneak into establishments to avoid a cover charge or because they lack proper identification. Another reoccurring scenario is someone who enters the wrong summer rental because they are unfamiliar with the dwelling or as a result of intoxication. Irrespective of the facts that resulted in your being arrested and charged with trespass in Monmouth County, selecting an attorney who has thorough knowledge and skill to defend you is your best option for counteracting the risk of conviction.

The lawyers at The Law Offices of Jonathan F. Marshall have what you need to successfully represent you anywhere in Monmouth County. We are a team of nine criminal attorneys, most of which are former prosecutors, that have been defending trespass charges at the Monmouth County Superior Court and in municipal courts throughout the region for over 100 years combined. If you were charged with criminal or defiant trespass, we have extensive experience handling cases like yours and decades of relationships built throughout the court system to bring to the table so you reach the best outcome in your matter. Contact our Red Bank Office at (732) 450.8300 for a free consultation with a lawyer on our team.

Charged With Trespass in Monmouth County

There are a wide range of settings in which someone can be charged with trespass under N.J.S.A. 2C:18-3. Conduct must fall within one of three categories in order to be convicted under this law.

III. Peering Into Windows or Openings

Relation To The Offense Of Burglary. Trespassing is similar to burglary in that both offenses contemplate an unauthorized entry of a structure. The primary distinction between the two charges stems from the fact that a burglar must enter the structure for the purpose of committing a criminal offense. All other elements are the same. As a result, it was held in State v. Singleton, 290 N.J.Super. 336 (App.Div.1996), that criminal trespass is a less included crime of burglary. As a result, you cannot be convicted of both criminal trespass and burglary in the same case.

Relationship To Domestic Violence. Trespass constitutes an act of domestic violence when it is committed against a victim who qualifies for the protections set forth under the New Jersey Domestic Violence Prevention Act. An individual can be the subject of a restraining order and forfeiture of his/her right firearms and other weapons when an incident of trespassing constitutes domestic violence.

The incident of trespass charges seems to grow every year in Monmouth County. A primary factor in the increased volume of trespassing offenses stems from the fact that many area municipalities have found 2C:18-3 to be a valuable law enforcement tool. If you were charged with trespassing in Tinton Falls, Brielle, Neptune City, Howell, Middletown or any other location in the county, the defense lawyers at firm are certainly capable of protecting your future. An attorney who has defended countless municipal court and indictable criminal charges, including the numerous former prosecutors on staff, will fight to secure the best resolution of your charge/offense for trespassing. This may come down to one of our attorneys utilizing years of experience and long standing relationships throughout the court system to negotiate an acquittal to your 2C:18-3 offense. In other instances, a favorable resolution may come down to an accomplished attorney winning at trial. Irrespective, you know when you hire The Law Offices of Jonathan F. Marshall that you will be represented by a lawyer with the ability to fully protect your interests and future.