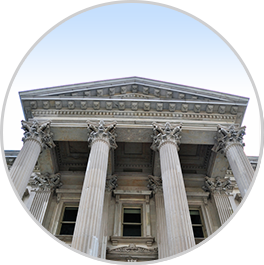 Arrested for a Crime?
Let Our Monmouth County Criminal Defense Attorneys Help Your Defend Your Future and Freedom.
Get Your Free Consultation

If you have been charged with a traffic violation, disorderly persons offense or an ordinance infraction and ended up on this site, there is a good chance your case is being heard in Monmouth County. Our lawyers have vast experience in all of the municipal courts in this county. In fact, several attorneys formerly prosecuted in Holmdel, Hazlet, Matawan, Howell, Colts Neck, Wall and other towns in the area. Make no mistake, just because you were charged with DWI, Simple Assault or some other municipal court offense, this does not mean that you will be convicted. The key to success in this regard is the selection of the right defense attorney in our view. The criminal team at The Law Offices of Jonathan F. Marshall is not only the largest in Monmouth County but also possesses over 100 years of collective experience appearing throughout the jurisdiction. Give us a call anytime 24/7 for a complimentary initial consultation or you may also schedule an appointment in our Freehold Office or Red Bank Office.

Jurisdiction of the Municipal Court

The municipal courts in Monmouth County possess jurisdiction to decide certain categories of charges that occur within the borders of a particular town. A municipal judge does not, however, possess authority to decide an indictable offense, that is, felony charges. The reason for this stems from several factors, including the fact that there is a right to grand jury with respect to felony charges, as well as a right to a jury trial, both of which only function at the Monmouth County Superior Court in Freehold NJ. Municipal Courts have jurisdiction to decide the following types of violations:

Indictable Charges With Companion Disorderly Persons or Traffic Tickets. A question often arises as to where a municipal court violation is going to be decided when it arise out of an incident that resulted in issuance of a First Degree, Second Degree, Third Degree or Fourth Degree criminal complaint (i.e. indictable Superior Court charges). Do all of the charges go to the Monmouth County Superior Court or only the felony ones? The general answer is that all of the charges go to the County level but it is certainly within the discretion of the county prosecutor to remand charges back to municipal court.

Although a municipal court judge only possesses authority to decide traffic violations, disorderly persons offenses and ordinance violations, their authority to set bail extends to Indictable Charges. In fact, a municipal judge is typically the individual who sets the initial bail in all felony cases alleged to have occurred within the borders of their town. The only indictable crime bails a local judge cannot set are those involving allegations of murder, kidnapping, manslaughter, sexual assault or contempt for violating a restraining order. There are various factors that a municipal judge should consider in determining the appropriate amount of bail. The judge should also consider the Bail Schedule that has been adopted by the administrative office of the courts, which sets forth the suggested bail amounts for a particular criminal offense. Once the bail amount has been set by a municipal judge, the related amount may be posted directly with the court or a bail bond may be secured through a bonding company. The typical fee for a bond, which is non-refundable, is ten percent (10%) of the bail amount. If bail is posted directly with the court, the amount is refundable once the related case is full resolved. In some instances, the court will not require the posting of the full amount and, instead, set it at “ten percent” (e.g. $25,000 with ten percent). This is different from the fee that you pay a bondsman. The “ten percent” is fully refundable. However, if the accused fails to appear and his/her bail is revoked, the warrant is the full bail amount (e.g. $25,000).

Initial Appearance. A defendant charged with a criminal or serious motor vehicle offense must be advised of his or her constitutional rights at his or her initial appearance in court. This proceeding is typically referred to as an arraignment and must inform the defendant of the nature of the charges against him, the range of penalty if found guilty and his rights to remain silent and be represented by counsel of his choosing. After advising an accused of these rights, the court will either set bail or release the defendant on his own recognizance.

Appointment of Counsel. It is a well established principle in New Jersey that an individual facing a disorderly persons offense or a traffic offense involving consequences of magnitude, has an absolute right to be represented by an attorney or appointment of counsel if they are indigent. A court cannot subject a defendant to proceedings involving these types of charges while unrepresented unless there has been a full and effective waiver of the right to counsel.

Appearance of Counsel. A litigant is free to appear with counsel at any point of his/her case. Typically, the initial appearance will be made, however, prior to arraignment. This is usually accomplished through written correspondence submitted to the court via fax or mail as permissible under Rule 7:6-1(b). This communication negates the necessity of an in-person appearance by counsel or the defendant. The correspondence includes:

Demand for Discovery. After entering an appearance, the next procedure is to write to the prosecutor and serve a demand for discovery. This is a request for any and all documents and other evidence (e.g. videos, laboratory tests, investigative reports, etc.) that is reasonably calculated to lead to the discovery of relevant information concerning the charges. If the prosecutor fails to provide the documentation in a timely or reasonable fashion, your defense attorney may file application with the court in the form of a motion for sanctions. The requested relief can include exclusion of evidence, dismissal of the charge(s) or any other sanctions that may be crafted by the court.

Motion Practice. There are a wide variety of motions that may be filed prior to trial including, but not limited to, a motion to dismiss the charges, suppress evidence, preclude testimony, etc.

A common offense encountered in Municipal Court in Monmouth County is referred to as an ordinance violation. An ordinance is a local regulation that has been adopted by a township, borough or other governmental unit to governing a particular area of law. The most frequently arising ordinance cases involve public nuissance infractions like excessive noise, public intoxication, disorderly conduct, and interfering with police. If you were arrested or otherwise issued an summons for allegedly violating an ordinance, the lawyers at our firm, The Law Offices of Jonathan F. Marshall, are well equipped to defend you. Our staff includes several former Monmouth County Municipal Prosecutors and the largest defense team in the county. We have been successfully handling ordinance summons for decades in Monmouth County and would be more than happy to put our skills to work for you. We hope you find the information regarding ordinance complaints of assistance and do not hesitate to contact us anytime 24/7 if you have questions or wish to speak to us about representation.

Burden of Proof. The prosecutor bears the burden of proving each and every element of the related ordinance infraction. The standard to be applied is proof beyond reasonable doubt.

Penalties, Fines & Jail. There is a wide range for fines that may be levied by a municipal court judge. The easiest way to determine what a fine can be is to reference the related ordinance of the municipality which should specify the amount that may be imposed. We have included the ordinances of the following towns on this site because they are encountered so much by our office:

The potential jail time if convicted under an ordinance is up to ninety (90) days in jail. The same period applies with respect to authority to impose community service (i.e. up to 90 days).

If you have been charged with a municipal court offense in Monmouth County, there may be a diversion program available to you that allows you to avoid prosecution. Most of these types of programs provide for dismissal of the related disorderly persons offense once the program has been successfully completed. The following are programs that can be utilized in municipal court to divert a case:

Too many individuals assume that diversion is something that anyone can handle on their own but this can prove to be an awful miscalculation for some. Our attorneys can give you a great opportunity to avoid such a pitfall. Lawyers are available immediately to discuss exactly how we can assist you and initial consultations are without charge. Give us a call anytime.

A potential defense to municipal court charges is termed the statute of limitation. This term describes the time period in which prosecution must be commenced in order for the court to hear the related charge. Our lawyers field questions involving the limitation period in municipal court for filing a traffic ticket or petty disorderly persons offense all the time so we have compiled this page to address this subject. If you have a more detailed question, please do not hesitate to contact one of our lawyers or to schedule a complimentary consultation in our Freehold or Red Bank office.

In accordance with N.J.S.A. 2C:1-6, a complaint charging an individual with a disorderly persons violaton must be commenced within one (1) year or it is time barred. For purposes of the statute of limitation, the one (1) year period begins the day the offense is committed. The prosecution of a disorderly persons offense begins when the complaint is filed with the court.

Time to File a Traffic Violation

N.J.S.A. 39:5-3 sets forth for the statute of limitation for issuing a traffic ticket. As a general rule, a motor vehicle summons must be issued within thirty (30) days of the alleged violation. This period is, however, extended to ninety (90) days for driving while suspended tickets under 39:3-40 and one (1) year for leaving the scene of an accident (N.J.S.A. 39:4-129), driving while intoxicated (DWI), and refusal to submit to a breath test. If you think you possess a statute of limitation defense, your best chance of successfully presenting it is through a skilled lawyer like the experienced criminal attorneys at our firm. Give us a call and one of our lawyers will guide you through the process.

The process known as expungement allows an individual to eliminate a record of a conviction provided certain conditions are met. In terms of a disorderly persons offense, the accused must wait at least five (5) years following the completion of probation and payment of all fines before an application for expungement is viable. The waiting period is two (2) years for a municipal ordinance violation. There is no ability to expunge a traffic offense although New Jersey law allows a court to disregard a prior DWI violation that occurred in excess of ten (10) years prior.

The municipal court defense lawyers at The Law Offices of Jonathan F. Marshall embody the largest assemblage of criminal attorneys in Monmouth County. At least four of the members of the firm possess over 20 years experience, including time serving as municipal prosecutors locally. We have the experience appearing in these courts and vast knowledge in the defense of charges like simple assault, possession of 50 grams or less of marijuana, shoplifting and other disorderly persons offenses. Call our offices anytime 24/7 to speak to an attorney immediately about the specifics of your case and what our firm can do for you to reach the best outcome of your charge.