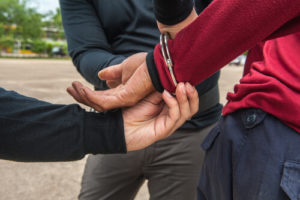 Oftentimes people attempt to flee or elude the police when they are in fear of being arrested. While this can be a natural reaction to the threat of getting in trouble, New Jersey has a firm policy of requiring submission to police authority. The result is that you can be charged with a criminal offense if you do anything to prevent, interfere or resist an attempt to place you into custody and/or handcuff you. A conviction for the offense of resisting arrest results in a criminal record, fines and even the potential for a state prison sentence. If you have been charged with resisting arrest, The Law Offices of Jonathan F. Marshall can help. With over 100 combined years of criminal defense experience litigating cases at the Superior Court and in municipal courts like Holmdel, Manasquan, Asbury Park, Keansburg, Lake Como, and Highlands, we have exactly what you are looking for to achieve success. An attorney in one of our offices is available to assist you immediately and the consultation is free of charge.

(a) Uses or threatens to use physical force or violence against the law enforcement officer or another; or

(b) Uses any other means to create a substantial risk of causing physical injury to the public servant or another.

There are several important things you need to know if you are facing resisting arrest in Lake Como or elsewhere in the county. First and foremost, you cannot be convicted under 2C:29-2 unless you possessed an intention to prevent the arrest. What this means is that your objective had to be to resist the effort to place you under arrest (e.g. place handcuffs on you). It should also be noted that the prosecutor must establish, beyond reasonable doubt, that the police officer was acting under color of official authority. However, a lack of proper legal basis for the arrest, including failure to possess probable cause, does not constitute a basis for someone to resist. The law is that an individual cannot resist even an unlawful arrest.

Material Elements. What the state must prove depends on whether your resisting arrest charge is classified as a disorderly persons offense or a fourth degree crime.When the charge is for a disorderly persons offense, the state must prove that the defendant prevented an arrest, that a law enforcement officer was the one attempting to make the arrest, that the officer acted under legal authority and announced his intent to make the arrest, and the defendant acted purposefully in preventing the arrest.When an offense is elevated to a fourth degree crime, flight from a law enforcement officer must be proven.When an offense is further heightened to a third degree crime, the state must prove that the defendant used or threatened to use physical force or violence against the officer or against another person or that the defendant used any other means to create a substantial risk of causing physical injury to the officer or another person.

Self-Defense. The only time an individual can resort to self-defense is when a police officer uses excessive force. In this instance, the accused is permitted to use that amount of force reasonably necessary to escape the encounter.

A resisting arrest charge in Monmouth County obviously has the potential to become much more complicated and risky than you might have initially believed. An accomplished criminal defense lawyer at our firm can ensure that you have the opportunity to avert negative consequences of a 2C:29-2 offense. We offer these services throughout Monmouth County and especially the busier municipalities in the county such as:

Resisting arrest is a fairly common offense, especially in nightlife towns like Red Bank. Broad Street and Front Street are packed with bars and restaurants where the is considerable alcohol consumption. Sometimes this leads to a negative interaction with the Red Bank police and even arrests. If you were arrested in New Jersey’s “hippest town”, Belmar, Sea Bright, Lake Como, Long Branch, Wall or elsewhere in Monmouth County, call the resisting arrest attorneys at The Law Offices of Jonathan F. Marshall. A lawyer on our defense team is available 24/7 to help you and the consultation is free.