Charged With Intent to Distribute in Freehold New Jersey 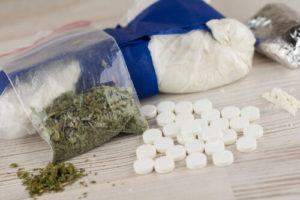 Being charged with distribution of illicit drugs or prescription medications considered controlled dangerous substances in Monmouth County is a serious matter and requires highly experienced legal represenation. New Jersey criminal law (N.J.S.A. 2C:35-5) prescribes severe penalties for conviction of drug distribution. The penalties escalate depending on the type and quantity of drugs involved and for selling drugs in a school zone or other area afforded enhanced protection.

It is critical that you obtain the assistance of an astute criminal defense attorney as soon as possible after an arrest for possession with intent to distribute in Freehold, Howell, Middletown, Ocean Township, Eatontown, Belmar or another Monmouth County municipality, There are ways to have distribution of CDS charges reduced, dismissed or deferred if an experienced Freehold drug crimes attorney gets involved with your case right away.

Lawyers from our offices at Freehold in Monmouth County, N.J., are available 24/7 to provide prompt legal representation. You have legal rights after an arrest or indictment on CDS distribution charges. Let us protect your rights, review the facts of your case and tell you how we can help. Contact us in Freehold as soon as you are able to at (877) 450-8301 for a free initial legal consultation.

Illicit drugs are known legally as controlled substances or controlled dangerous substances. Without authorization (such as a pharmacy license), it is illegal under New Jersey law to knowingly or purposely:

The federal government has classified drugs, substances and certain chemicals used to make drugs into five distinct categories, or “schedules,” according to the drug’s acceptable medical use and its abuse or dependency potential.

New Jersey law bases drug crime penalties on the type of drug involved in the alleged crime according to how it is scheduled and the quantity of the drugs seized.

Here is the federal controlled substances schedule and examples of the drugs (“drugs, substances or chemicals”) in each classification:

Schedule I: Drugs with no currently accepted medical use and a high potential for abuse.

Schedule III: Drugs with a moderate to low potential for physical and psychological dependence.

Schedule IV: Drugs with a low potential for abuse and low risk of dependence.

More than half an ounce but less than 5 ounces

Less than half an ounce

5 pounds or more but less than 25 pounds of marijuana, 10-49 marijuana plants (regardless of weight), or 1 pound to less than 5 pounds of hash.

1 ounce or more but less than 5 pounds of marijuana or 5 grams to less than 1 pound of hash.

Less than 1 ounce of marijuana or less than 5 grams of hashish.

Criminal distribution or intention to distribute a Schedule I, II, III or IV drug not specifically addressed by New Jersey law is a third-degree indictable offense. Conviction is punishable by 3-5 years in prison and a fine of up to $25,000.

Criminal distribution or intention to distribute a Schedule V drug in New Jersey is a fourth-degree indictable offense punishable by 18 months in prison and a fine of up to $25,000.

Prison time and fines double for distribution of controlled dangerous substances to minors or pregnant women. A threat of deadly force or other violence connected to a drug distribution charge also increases the potential prison sentence and fine.

Being found guilty of distributing drugs in Monmouth County will be costly and will most likely require prison time if charges include a Schedule I or II drug. If you are facing drug distribution charges, it’s crucial to have the assistance of an experienced Freehold drug distribution defense attorney. At the Law Offices of Jonathan F. Marshall, our Monmouth County drug crimes lawyers understand what is at stake and what is necessary to ensure the best possible outcome for you.

Attorneys at the Law Offices of Jonathan F. Marshall have the knowledge, skills and determination to fight for you if you face drug trafficking charges filed in Monmouth County. We are former prosecutors and public defenders well versed in New Jersey drug laws. We know how police and prosecutors operate and use our insider knowledge to the advantage of our clients. Our experience as former prosecutors and public defenders working in courtrooms across Monmouth County enables us to determine the best defense options available to you.

In many drug distribution cases, police have found a large quantity of drugs and/or paraphernalia such as scales or sandwich bags, which they allege to be for packaging and distributing drugs. Sometimes a defendant has been under suspicion and/or surveillance or may have been reported to police. Sometimes, police happen upon a quantity of drugs and alleged drug paraphernalia and arrest anyone nearby who they can claim possessed or exercised control over the contraband drugs.

To develop the best legal defense against the drug distribution charges you face, we will investigate the circumstances before and after your arrest. We will obtain statements from any witnesses, as well as police reports and other evidence connected to the case. We will develop a defense supported by the facts of your case. Common flaws in criminal cases include:

Once we have fully investigated your case, we will seek to negotiate a reduction or dismissal of your charges or pursue alternatives to conviction based on the specific facts of the case. These negotiations are aided by the professional relationships our attorneys have developed with Monmouth County prosecutors over our decades of legal practice.

If your case must go to trial, the prosecution will be required to prove your guilt beyond a reasonable doubt. We will use evidence gathered in our investigation as well as our extensive litigation experience to challenge, refute and raise doubt about the prosecution’s case. We always prepare cases as if we will go to trial, and we have a strong track record of obtaining “not guilty” verdicts.

New Jersey imposes harsh penalties for criminal distribution of drugs, but the state also provides the opportunity for defendants to avoid incarceration through probationary diversion programs. A first-time offender with no violence associated with his or her case may qualify for a diversion program that keeps them out of prison.

These programs are strict and meant for defendants who are serious about dealing with drug, alcohol and/or behavioral problems. The charges are dropped after successful completion. But the failure to complete the requirements of the diversion program can result in immediate imposition of the full sentence based on your original drug distribution charges.

Your attorney from the Law Offices of Jonathan F. Marshall will work with you to achieve the most favorable outcome available in your drug distribution case. Being represented by an experienced and respected criminal defense attorney who has professional relationships in Monmouth County ensures you the best opportunity of dealing with charges of drug distribution and avoiding the harsh penalties.

Before answering police questions, call us toll free at (877) 450-8301 in Freehold or Red Bank or contact us online to learn how we can protect you from the criminal charges you face.