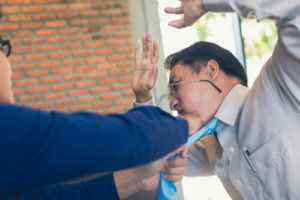 Simple Assault is the term used to describe the criminal offense outlined in N.J.S.A. 2C:12-1(a) of the New Jersey Assault Law. It is one of the most common charges encountered in Monmouth County Municipal Court. A complaint alleging simple assault arises out of a wide variety of altercations including incidents of domestic violence, an alcohol related confrontation (e.g. bar fight), and physical disputes between police and members of the public. While these types of cases are heard every day in municipal court, you definitely see a spike in the volume of individuals arrested for simple assault during the summer in Monmouth County, principally in beach towns like Manasquan, Belmar, Asbury Park and Long Branch.  The attorneys at our firm have extensive experience defending clients charged with simple assault throughout Monmouth County. If you are the subject of an assault charge in municipal court, it is certainly in your best interests to contact a skilled lawyer. The lawyer on the defense team of the Law Offices of Jonathan F. Marshall are certainly equipped to represent you. To obtain a free consultation with an attorney immediately, call 732-450-8300.

The headings below explain some of the more detailed aspects of a simple assault offense:

Domestic Violence Charges for Simple Assault. Commission of a simple assault constitutes a basis for a restraining order (i.e. incident of domestic violence) where the alleged victim is an unemancipated minor, spouse, former spouse, household or former household member or someone who is or was in a dating relationship with the accused.

Potential Defenses to a Simple Assault Offense. If you are arrested for simple assault, all defenses set forth under New Jersey law apply including self-defense and defense of others. Another defense that crops up is referred to as the de minimis infraction defense.

As previously stated, simple assault falls within the category of a a disorderly persons offense under New Jersey Law. This is the equivalent of a misdemeanor but nonetheless results in your having a criminal record, in addition to the penalties previously described, if you are convicted. The potential consequences make this a matter worthy of your attention. So if you were charged with in simple assault anywhere in Monmouth County, including Atlantic Highlands, Howell, Tinton Falls, Wall, Holmdel, Manalapan and Lake Como, take the time to speak to a skilled simple assault lawyer at our office by calling 732-450-8300. Our attorneys would be happy to answer your questions or to set up an appointment in our local offices.